Congratulations to Carol Choma our Life Member for 2022.

Thanks to all our Lifetime Members. 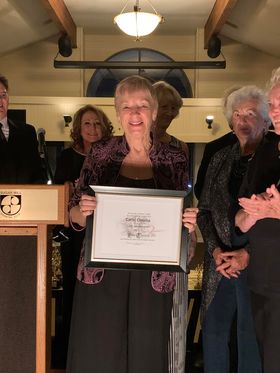 Honoring a hard - working volunteer with the title of Life Member has been a tradition in our little theater since 1989. Each year an appointed committee decides who meets the qualifications and goes the extra mile as an outstanding volunteer.

Everyone is eligible once they have become a working volunteer for at least ten years.

Most Life Members are judged on the amount of work they do in different aspects over the years at the Little Theatre. You don't have to do everything – perhaps you just want to volunteer in a couple areas.