"The Game's Afoot (or Holmes for The Holidays)," 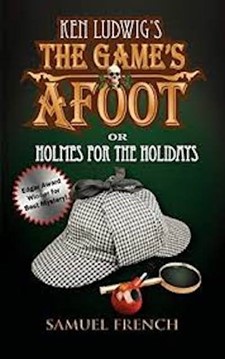 Audition dates are Sunday and Monday, November 8th and 9th from 7:00 pm and all are welcome. Show dates are January 7th through January 24th.

Auditions will consist of cold readings from the script, although anyone auditioning should be familiar with the plot and characters. Auditions will be held in the building (720 E. Third Ave) adjacent to our main theater building. Those auditioning should arrive on time (7:00 PM), prepared and with headshot and resume if you have one. This audition is open to all and newcomers are encouraged to attend.

Social distancing will be strictly enforced and masks will be required. The Little Theatre takes any risk of exposure to COVID-19 seriously and has ensured that our facilities and protocols are in line with a “safety first” policy. For additional information contact the theater at: info@nsbplayers.org or mfunaro55@gmail.com.

The Little Theatre of New Smyrna Beach has posted its COVID-19 safety protocols and procedures on the home page of its website: www.nsbplayers.org. For additional information please contact info@nsbplayers.org.

Synopsis: This hilarious play brings murder, mystery, mayhem, and madcap adventure to the stage. William Gillette, a Broadway superstar, famous the world over for his portrayal of Sherlock Holmes, has invited fellow cast members to his opulent home for a holiday dinner party. But when one of the guests winds up dead, Gillette has to summon every ounce of Sherlock to solve the mystery. This play will keep you laughing and trying to figure out whodunit until the final blow.

CHARACTER DESCRIPTIONS FOR THE GAME'S AFOOT...

All ages are a guideline only; this director looks at what CAN be to include making sure couples DO match logically; not necessarily an age definition but overall chemistry. To that end, the director holds the right to “age” any actor/actress deemed formidable for a specific role they may fit; so please do NOT read for a part based on ages. DO read based on desire & ability to make the role happen. Auditions are where we get to give it our best try for ANY part. Use this thinking as you pick your desired roles. Remember ALL these characters must have Great Comic timing and are involved in Stage Combat at some level as well as romantic/intimacy required moments. Thank you & Break A Leg!

William Gillette / Sherlock (must be able to play late 30s – 50s): Male. A dynamic and charming stage actor (based on a real person). Has made a fortune from his stage adaptation of Sherlock Holmes, whom he also plays. Recently shot in the arm in a bizarre incident, Gillette is determined to bring his Sherlockian skills to bear on solving the case. Must have great comic chops and stage combat skills required. A dashing leading man and ardent lover of all that the glorious game of life has to offer. Passionate about his interests, which include the theatrical arts, mystery, and of course Sherlock Holmes. Described by Ludwig as, “a strikingly handsome man...good humored, full of irony and life. A sort of modern-day Ulysses.” Transatlantic accent preferred. Stage combat required.

Felix Geisel / Moriarty (must be able to play 30s-45): The company’s character actor, Felix is histrionic (overly dramatic), a true theatrical who has given his life to the stage. Felix is Gillette’s best friend and occasional sidekick. Married to Madge. A devoted character actor who relishes his craft but is not immune to the occasional bout of jealousy. Described by Ludwig as, “histrionic and arch in a Lionel Barrymore/Sir Toby Belch sort of way.” Transatlantic accent preferred. Actor must have great comic chops and be physically strong – literally must be able to move a “dead” woman by himself. Stage combat required / Madge slaps this character.

Simon Bright/Zerlinksy (20s-30s): The “mangenue” of the company, Simon is an enthusiastic young man, eager to please and find success. A bit of a naïf, Simon can occasionally be overly sensitive. Recently married to Aggie, they make a charming and wonderful couple. Ability to play an instrument is a plus as ukulele is noted in script, but NOT required. A witty jokester who finds humor in nearly everything. Described by Ludwig as, “sweet and enthusiastic.” Transatlantic accent preferred. Stage combat required.

Inspector Harriet Goring (40+): English and eccentric, completely one of a kind. By turns, witty and incisive, suddenly lost and dim, she is disarming in her inability to be defined. Always off the mark, and yet never far from the truth, somehow, she always gets her man. Wonderful opportunity for a character actress; must have great comic chops and stage combat skills required. A police inspector who once dreamed of being an actress, and who is still an avid theatre fan. Described by Ludwig as, “British, eccentric, and one of a kind. One minute, she seems wry and clever; the next minute she’s off into a world of her own. She gets things wrong without even knowing it; yet she also seems just the sort of person who can find out when you’re lying. That makes her formidable.” Wonderful opportunity for a character actress; must have great comic chops. British accent & stage combat required.

Martha Gillette (60+): Gillette’s dotty mother, elegant though a bit foggy, Martha never shies away from a fight. Always willing to lob a criticism when necessary, all the same, Martha is loyal to Gillette and his gang of theatrical misfits. Nouveau riche, which is to say, she lives a lavish and glamorous lifestyle; but lacks the class normally associated therewith. Described by Ludwig as, “somewhat vague and dithering.” Must have great comic chops and New York or New England accent may be appropriate.

Madge Geisel / Marian (30s-40s): Wry and outspoken (think Rosalind Russell), Madge, like her husband Felix, is a lifelong theatrical. She is game for anything, but back her into a corner and she will come out swinging. A witty and energetic character actress. She has an edge to her, and a sharp tongue, but her affection is genuine. Described by Ludwig as, “flamboyant and wry in a Rosalind Russell smart-mouthed-gal-about-town sort of way.” Must have great comic chops. Transatlantic accent preferred. Stage combat required.

Aggie Wheeler / Alice (20s-30s): Bright-eyed and bushy-tailed, Aggie is the ingénue of the company. Good-natured and kind, Aggie has had tragedy in her past, though she seems to have dealt with it well, and even moved on. Recently married to Simon, they make a charming and wonderful couple. A genuine and sensitive young actress who is often swept away by the goings on around her. Described by Ludwig as, “a real product of her age...beautiful, bright- eyed, and full of spunk.” This character has a dark side. Transatlantic accent preferred. Stage combat required – she is “choked” by a male.

Daria Chase (30s-50s): Glamorous & gorgeous, Daria is the theatre critic we all love to hate. Biting, bitchy, and utterly charming, you can’t help but like Daria, despite the terrible things she says and writes. A wonderful sense of humor goes a long way towards endearing Daria to the audience. Very self-confident and aware of her own power and charm. Described by Ludwig as, “one of those people you can’t take your eyes off; and despite all her showbiz cattiness, you can’t help liking her – or at least admiring. She has a sense of humor and has invented herself from the ground up, which is no mean feat.” With a quirky side, she believes in the afterlife as she performs a séance in the show. With her air of entitlement - Transatlantic, New York, or even high-class Southern accents may be appropriate. Must have wonderful comic timing and be a skilled physical comedian as she is dragged around stage a lot by others. Daria must scream several times.